Silentio Pathologia might be compared with Sarah Sze’s installation Triple Point at the U. S. Pavilion in the Giardini. 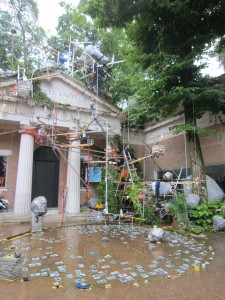 Sze has brought many thousands of things into the rooms and part of the landscape of the Pavilion. These things include cans of paint, pads of paper, mirrors, ladders, lamps, rocks, photographs, furniture, and countless other objects. 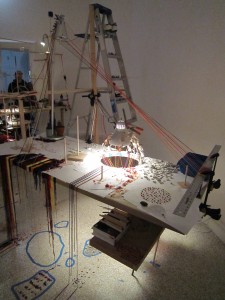 There is little that connects these objects between rooms and no sense that rooms have been transformed. 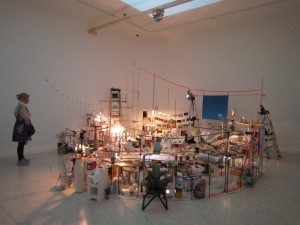 According to Sze, “[t]he title for the whole show, ‘Triple Point,’ refers to the situation where all three states of a substance—gas, liquid, and solid—can exist at once. So it’s this teetering between states, the fragility of equilibrium, and the constant desire to create stability and a sense of place that frame the narrative.” (Conversation between Sarah Sze and Rirkrit Tiravanija, “Thing Theories,” in ArtForum, summer 2013.) 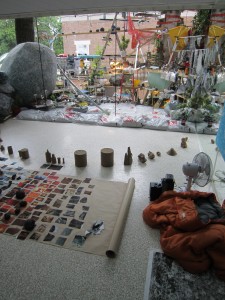 In the Pavilion, the things that constitute Triple Point speak less to the “fragility of equilibrium, [a] constant desire to create stability and a sense of place,” than an attempt to turn one’s garage into a kind of sci-fi stage. Certainly, there is the “ahhh” factor – some things move, shadows are cast, objects are organized by color — but this is mostly an accumulation of stuff built up or laid out. 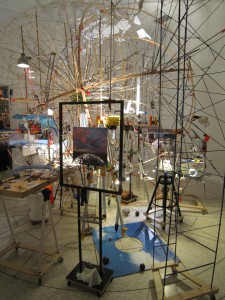 As an installation, Triple Point arouses a viewer’s curiosity and urges one to play with things. Silentio Pathologia, on the other hand, draws the visitor into a space wherein the physical and intellectual journeys are created by the objects, and one experiences these objects as a coherent environment.